The Solo Stove Ranger is one of the more unique types of cookers out there. You’re not going to be hosting a backyard BBQ party with this piece of equipment any time soon, but that doesn’t mean that it doesn’t have its place in your arsenal.

It’s a great alternative to a traditional firepit that gives off less smoke and leaves you with a much cleaner burn.

That being said, the Solo Stove Ranger comes with a rather hefty price tag when compared to the alternatives you have at your disposal. Now, is it worth it?

There are holes littered around the bottom and inside of the stove. These holes are ingenious in that they pull in cold air that gets attracted by the heat of the fire. The stove then splits that air into two different directions.

It’s a complicated explanation for a system that looks simple, but it’s actually a remarkable idea that works surprisingly well.

Given how hot the stove burns, there is generally very little ash left for you to clean up once you’re done. There is an ash pan at the bottom, but a simple tip and shake tends to be enough to clear out anything that has built up.

The Solo Stove Ranger comes with a long list of benefits and features. Some of these are rather mundane, but most are actually significant talking points that should factor into your decision to make this purchase.

First, the Solo Stove Ranger does away with that typical smokey campfire smell that you normally get with a traditional fire.

You all know this smell. After a long night around a fire, there’s a lingering scent that can be rather unpleasant to wake up to. The hotter fire and decrease in smoke means that this smell is all but eliminated.

There’s going to be a bit of a scent, sure, but it’s far less than you would get with regular open fire. This also means that the smoke isn’t going to stick to your clothes. This is invaluable to those that hate that stench that fires can end up leaving on a good pair of trousers.

The warranty and guarantees that you get on any product is a testament to the manufacturer’s confidence in the quality. When it comes to Solo Stove, the company puts its money where its mouth is.

The Solo Stove Ranger comes with a full lifetime guarantee. Needless to say, that’s some serious coverage. However, that doesn’t imply that the Ranger is invincible or even particularly durable.

The Solo Stove Ranger is made out of 304 stainless steel. It’s a durable material that doesn’t weigh a fraction of what typical cast iron fire pits weigh. However, it’s not as strong as that cast iron that you’re used to.

While you do have a guarantee if anything goes wrong, you should try to be a little gentle with your Solo Stove Ranger when you’re out in the wilderness.

In fact, being able to take the Ranger out into the wilderness is one of its biggest selling points. The entire stove only weighs 15 pounds, which is nothing compared to the heavy cast iron of fire pits.

We said that we’re going to be brutally honest, and we meant it. While we’re all fire the Solo Stove Ranger, it is far from a perfect product.

One of the biggest issues that we have with the stove is the fact that you can’t really cook over it.

While theoretically possible, the stove clearly isn’t built for cooking purposes. Not only does it not come with a grate, meaning you would have to buy one yourself, but it also doesn’t come apart.

Why does that matter? Well, being one solid unit means that cleaning it out after cooking would be a nightmare. All those burgers and steaks drip grease and juice into your fire. That stuff needs to be cleaned up at the end of the day.

This is a particularly big blow to the Ranger when you look at the portable fire pit alternatives on the market that do offer ease of cooking. While the competitors may weigh more, there are plenty of people out there willing to make that sacrifice for some tasty BBQ.

That’s not to say that you can’t cook over the Ranger at all, though. You can cook small things like hotdogs or marshmallows if you’re in a pinch, but don’t expect to be cooking dinner over this thing.

That’s our biggest issue with the Solo Stove Ranger, but it really isn’t the elephant in the room. The price of the unit is.

No matter how good the technology or construction is, you’re going to struggle to justify a $200 purchase on a fire pit.

That price is enormous compared to some of the alternatives, even if the design and engineering of the Ranger are worth the premium price tag.

Whether you’re willing to pay that much for the fire pit is up to you, but we think it’s a little bit too steep. Again, not being able to cook over it really hits it hard when you consider how much cash you’re forking out for it.

Our last pain point isn’t something that we’ve experienced ourselves but have heard reports of. Apparently, there is a bit of an issue regarding the Ranger and rust.

We can’t speak from experience here, but your lifetime guarantee covers rust damage, anyway. Besides, if you look after your fire pit, then it’s not going to rust up in the first place.

The Solo Stove Ranger has a plethora of five-star reviews on pretty much every single retailer that provides it. There’s a reason that it is considered so popular regardless of any apparent issues it might have.

Do You Need The Solo Ranger?

To answer this question, you need to ask yourself one simple question: how often do you go camping?

If it’s once every few months or so, then no. $200 is a large amount of money to invest in an item like this for a hobby that you don’t particularly partake in.

However, if you’re more of an avid outdoorsy type, then you can easily justify the heavy price tag.

The Solo Stove Ranger is a massive quality of life improvement above all else. It doesn’t redefine camping as we know it, but it does make the experience a little easier to deal with on the bad days.

Now, what’re our final thoughts on the Solo Stove Ranger?

First and foremost, it’s a phenomenal piece of hardware. The entire price tag attached to the pit is almost exclusively for the ingenuity of the design, and rightfully so.

Despite being simple looking from the outside, how the unit actually works is incredible. It’s not just a small bonus, either. You’re going to notice the difference between the Ranger and a more traditional fire pit.

It’s not as durable as we might have liked, which is a shame, but the lifetime guarantee more than makes up for that. It’s the same scenario as with the apparent rusting. If you take care of the Ranger, you’re not going to run into any major issues.

It’s also great that the stove is so light. It’s a lifesaver being able to throw this thing into the camper before we set off. The amount of time and frustration that it saves is easily worth double the $200 investment to an avid camping fan.

However, not being able to cook over it remains to be a massive issue for us. Primarily, it means that we need to source our cooking methods from somewhere else.

Most of the time, this isn’t an issue because of the RV. However, there’s no point in using a device designed to negate the negative effects of fire if we need to start a fire to cook with at the end of the day.

If you’re not the RV or gas stove type of person, then you should weigh the advantages and disadvantages here. You’re going to have to source your food from somewhere else, and we all know how much of a pain that can be.

Check Out The Other Solo Reviews:

The Solo Stove Fire Pit: A Review of the Best Fire Pit on the Market

Solo Stove Lite Review – Is It Worth It?

Solo Stove Lite Review – Is It Worth It?

The Solo Stove Fire Pit: A Review of the Best Fire Pit on the Market 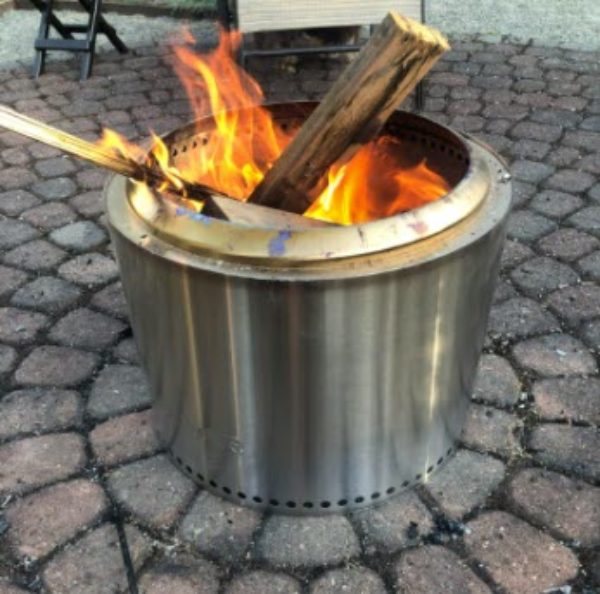